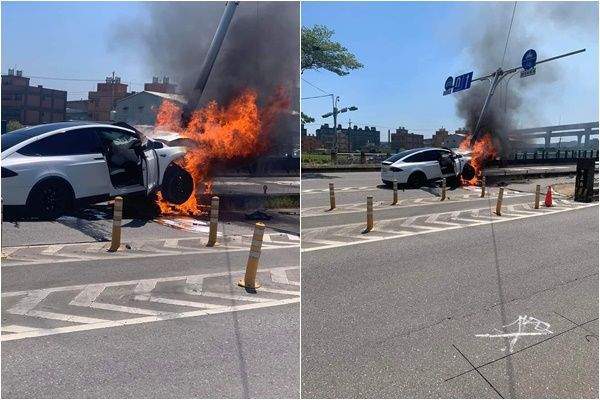 International Business News  –  Taiwan’s “ETtoday News Cloud” news, a serious car accident occurred on Zhongzheng North Road, Taoyuan City, Taiwan this morning (22nd), a white Tesla lost control and hit a bridge pier and caught fire. Witnesses said that there was a father and son in the Tesla car at the time. The father was seriously injured. He was once stuck in the car and was pulled out by the people at the scene, while the youngest son was frightened and was not seriously injured. According to the report, the police initially identified the injured as artist Jimmy Lin, who had blood on his face when he was dragged out. The detailed injury and the cause of the accident are yet to be further investigated.

According to the report, the car accident happened at 10:50 a.m. on the 22nd. At that time, Jimmy Lin drove his son from Zhongzheng North Road, Luzhu District, Taoyuan to Taoyuan, and hit a bridge pier on the way. He was injured and was unable to speak for a while. The son who was sitting in the passenger seat suffered a bruise on his face. Currently, both of them have been sent to Linkou Chang Gung Hospital.

According to Taiwan’s “Central News Agency”, entertainer Jimmy Lin was driving a Tesla car through Luzhu District, Taoyuan City on July 22, when it hit the separation island between the roads. Jimmy Lin and his son were injured and sent to the hospital. Jimmy Lin’s agent said that it is still under investigation.

According to Taiwan’s “United Daily News”, at 11:00 this morning in Luzhu District, Taoyuan City, a Tesla collided with a bridge and a locomotive separated the island, and the whole car caught fire.