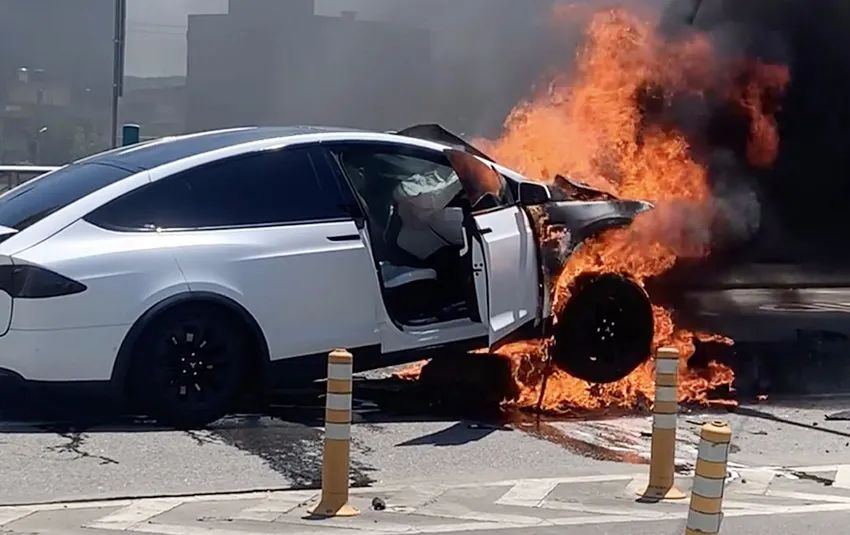 As you can see from the photos at the scene, the vehicle crashed into the divider bar of the divided road, catching fire on the spot and causing serious damage. And Lin was rescued lying on the roadside with head injuries and a suspected dislocated right arm.

Reports say that Jimmy Lin was accompanied by his child with facial abrasions. At present, both have been sent to the hospital for treatment, Jimmy Lin’s family has also rushed to the hospital, and told the media that the two should not be seriously hurt.

According to Taiwan’s “Movers and shakers”, the crash occurred at around 10:50 a.m., when a white Tesla Model X suddenly crashed into a divider on a fork in the road, sparking a fire of its own.

Witnesses helped to rescue the driver and his entourage immediately after the incident, only to discover that it was Jimmy Lin and his children.

Jimmy Lin, who was rescued, was lying on the side of the road with blood on his head, unable to speak for a time, and a suspected fracture in his right hand, according to reports. His child, on the other hand, had facial abrasions but was in great shock. At present, both have been sent to the adjacent hospital for treatment.

From the photos of the scene, the local firefighters put out the fire, the body has been burned off half. According to “United News”, the police confirmed that Jimmy Lin did not drink and drive, the specific cause of the accident is under further investigation.

Shortly after, Jimmy Lin’s family spoke out, saying that Lin is receiving treatment and should not be seriously hurt.