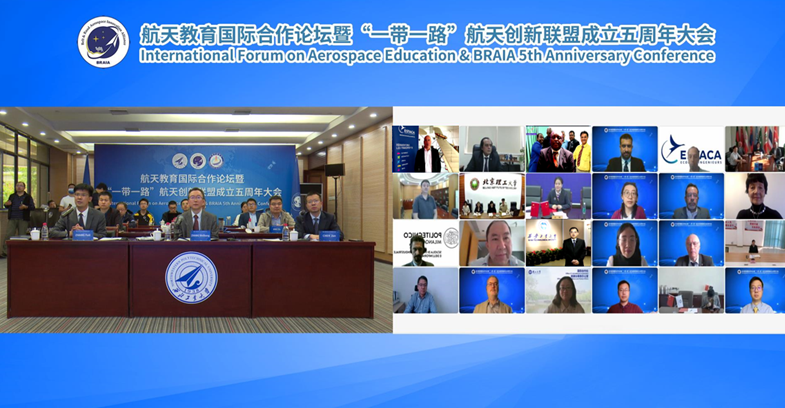 Experts and scholars from Pakistani universities, which are important partners of NPU in South Asia, attended the conference and made reports. Dr. Adnan Maqsood from National University of Sciences and Technology (NUST) made a work report, indicating that NUST has achieved fruitful results through close cooperation with BRAIA and a group of Chinese universities including NPU in the past five years. For example, since October 2020, scholars from Pakistani universities have been actively engaged in joint research seed fund projects initiated by BRAIA in aerodynamics, composite and microsatellite. Moreover, during the difficult time of fighting against COVID-19, the Permanent Secretariat of BRAIA has been keeping close touch with NUST. The Permanent Secretariat office in NPU managed to offer a batch of masks to NUST, hoping that BRAIA members will overcome the difficult time hand in hand.

Besides, Dr. Adnan Maqsood also promoted an upcoming internship program for international students this summer. “Essentially, the notion of this internship for international students is to acclimatize them with hi-tech research labs. Moreover, the opportunity will also enable foreign students to learn from the industry experts besides gaining hands-on experience.” The program is open to university students from all BRAIA members, and plays a huge role in promoting talent exchange in aerospace and other fields among different countries.

In addition, on the conference, Mr. Rehan Abdul Baqi, Rector of Institute of Space Technology (IST), Pakistan also sent his wishes to celebrate the 5th anniversary of BRAIA. Prof. Najam Abbas Naqvi from IST made an academic report on the theme of Exploration and Practice of Multilateral Scientific Research and Aerospace Talents Cultivation.

Regarding the cooperation between NPU and Pakistani universities and research institutes, both sides have achieved fruitful results. Nowadays, NPU has maintained a close tie with National Engineering and Scientific Commission and more than ten universities including NUST, IST and Air University in Pakistan. As the Permanent Secretariat of BRAIA, NPU has strongly supported NUST to take the leading role in South Asia as the first BRAIA Regional Development Center. This also demonstrates that Pakistan is one of the important countries that NPU endeavors to collaborate with according to its envisioned global footprint. NPU aims to enhance the competence building for Belt and Road countries and regions based on the consensus achieved and the joint efforts made together with BRAIA and partners in Pakistan.

Till now, BRAIA has 74 members from 22 countries on 6 continents around the world. It has held 33 large-scale cultural, scientific and technological exchange activities, from which more than 4500 teachers and students have benefited directly. Looking into the future, as BRAIA Permanent Secretariat, NPU will further strengthen cooperation with Pakistani universities and research institutes in fields of scientific research, joint educational institutions, college-enterprise collaboration, etc. to deeply implement the Belt and Road initiative.