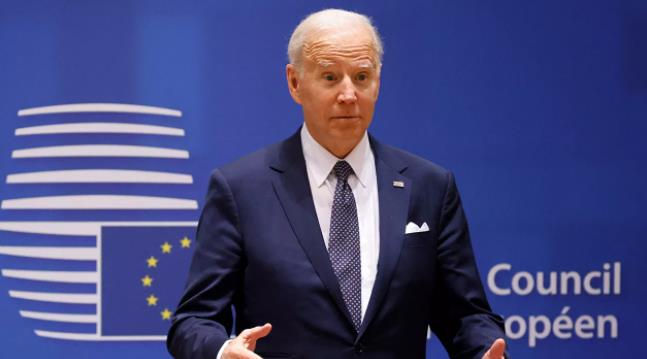 U.S. President Joe Biden on Tuesday announced the imposition of an energy embargo on Russia, banning U.S. imports of oil, liquified natural gas and coal from Russia over its ongoing military operations in Ukraine.

“This means Russian oil will no longer be acceptable to U.S. ports,” the president said in remarks he delivered from the White House. He claimed the move will deal a “powerful blow” to Russia’s ability to sustain funding for its military operations, while also admitting that it will backfire on Americans at home by causing continued price hike at gas stations.

The gas price at the pump, Biden said, “went up 75 cents” since Russia launched the military operations. “With this action, it’s going to go up further,” he added.

Meanwhile, the European Union, which relies on Russia for some 40 percent of its natural gas supplies, announced earlier Tuesday a set of comparatively limited measures, reducing imports of Russia natural gas by two-thirds this year and aiming to be free from dependence before 2030. The United States is far less dependent on Russian energy than European countries.

Russian President Vladimir Putin recently said at a meeting with women flight crews of Russian airlines that the wave of Western sanctions is akin to a “declaration of war.”

It was “a difficult decision” to launch a special military operation in Ukraine, but there are “absolutely real threats” to Russia, Putin said, adding that if Ukraine joins the North Atlantic Treaty Organization, the whole military bloc is obliged to support Kiev militarily.